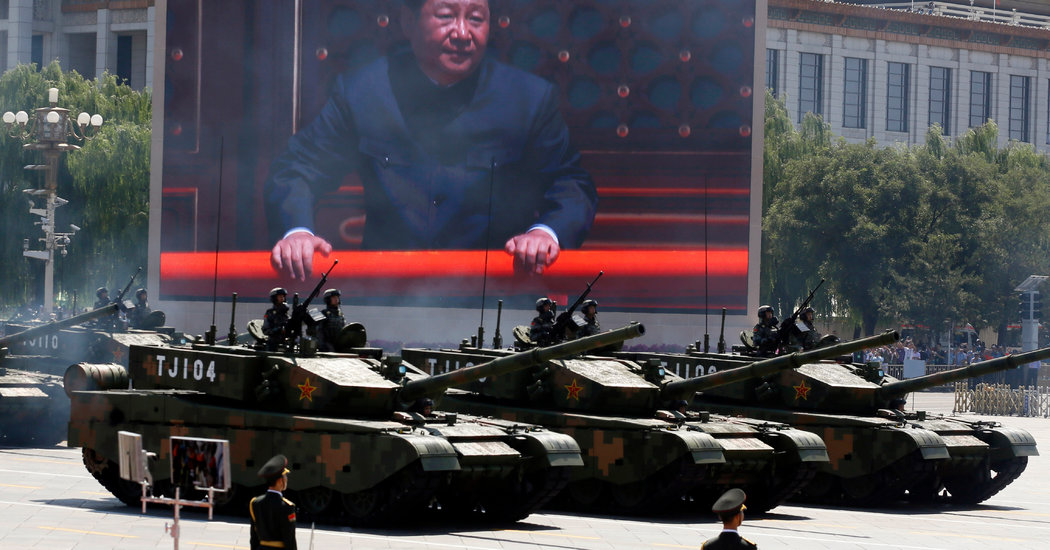 The Communist Party’s emerging empire is more the result of force than a gravitational pull of Chinese ideas.

I am the son of two empires, the United States and China. I was born in and raised around Washington in the Nixon-to-Reagan era, but my parents grew up in villages in southern China. My father was a member of the People’s Liberation Army in the 1950s, the first decade of Communist rule, before he soured on the revolution and left for Hong Kong.

So it was with excitement that I landed in Beijing in April 2008 to start an assignment with The New York Times that stretched to almost a decade. I had just spent nearly four years reporting on the bloody failure of the American imperial project in Iraq, and now I was in the metropole that was building a new world order.

China had entered a honeymoon phase with other nations. For years, anticipation had built for the 2008 Summer Olympics. Though China had suppressed a Tibetan uprising that spring, it earned international good will after a devastating earthquake.

People flocked to Beijing for China’s “coming out” party. Foreign leaders gawked at gleaming architecture and opening ceremonies that signaled the nation’s ambitions. After the festivities ended, the world arrived at another inflection point — the implosion of the American financial system and the global economic crisis. China’s growth buttressed both the world economy and a belief among its officials that its economic and political systems could rival those of the United States.

Though unabashedly authoritarian, China was a magnet. I was among many who thought it might forge a confident and more open identity while ushering in a vibrant era of new ideas, values and culture, one befitting its superpower status. When I ended my China assignment last year, I no longer had such expectations.

From trade to the internet, from higher education to Hollywood, China is shaping the world in ways that people have only begun to grasp. Yet the emerging imperium is more a result of the Communist Party’s exercise of hard power, including economic coercion, than the product of a gravitational pull of Chinese ideas or contemporary culture.

Of the global powers that dominated the 19th century, China alone is a rejuvenated empire. The Communist Party commands a vast territory that the ethnic-Manchu rulers of the Qing dynasty cobbled together through war and diplomacy. And the dominion could grow: China is using its military to test potential control of disputed borderlands from the South China Sea to the Himalayas, while firing up nationalism at home. Once again, states around the world pay homage to the court, as in 2015 during a huge military parade.

For decades, the United States was a global beacon for those who embraced certain values — the rule of law, free speech, clean government and human rights. Even if policy often fell short of those stated ideals, American “soft power” remained as potent as its armed forces. In the post-Soviet era, political figures and scholars regarded that American way of amassing power through attraction as a central element of forging a modern empire.

China’s rise is a blunt counterpoint. From 2009 onward, Chinese power in domestic and international realms has become synonymous with brute strength, bribery and browbeating — and the Communist Party’s empire is getting stronger.

At home, the party has imprisoned rights lawyers, strangled the internet, compelled companies and universities to install party cells, and planned for a potentially Orwellian “social credit” system. Abroad, it is building military installations on disputed Pacific reefs and infiltrating cybernetworks. It pushes the “One Belt, One Road” infrastructure initiative across Eurasia, which will have benefits for other nations but will also allow China to pressure them to do business with Chinese state-owned enterprises, as it has done in recent years throughout Asia and Africa.

So far, Chinese soft power plays a minor role. For one thing, the party insists on tight control of cultural production, so Chinese popular culture has little global appeal next to that of the United States or even South Korea.

No nation knows China’s hard ways better than Norway. China punished it by breaking diplomatic and economic ties for six years after the independent Nobel committee in 2010 gave the Peace Prize to Liu Xiaobo, a pro-democracy writer imprisoned in China (he died of cancer in July).

President Xi Jinping is the avatar of the new imperium. The 19th Party Congress in October was his victory lap. Party officials enshrined “Xi Jinping Thought” in the party constitution, putting him on par with Mao Zedong. Mr. Xi said China had entered a “new era” of strength and the party would be the arbiter of public life. Mr. Xi holds appeal for foreign leaders aspiring to strongman status — President Trump openly admires him.

Many Chinese people told me they still believed the country’s top leaders looked out for ordinary people, even if the party was rotting. This belief was rooted in abstract hope rather than empirical evidence. It was like peering through the toxic air enveloping Chinese cities in search of blue sky.

The culture of hard power goes from top to bottom. In the provinces, party officials move quickly to suppress any challenges to their authority. When they sense rising mass resistance, they buy off or imprison the leaders.

I saw this in my first year in China, when officials separately broke the will of parents furious over deadly tainted milk and ones grieving over thousands of children who had died in shoddily built schools during the Sichuan earthquake. I learned this was typical of the approach taken by Chinese officials. Most Chinese do not run afoul of the party, but those who do pay a high price.

The abuse of power is frequent, and many Chinese say corruption is their top concern. All other issues, from environmental degradation to wealth inequality, are linked to it. Mr. Xi is canny enough to capitalize on the discontent: He leads an anticorruption drive that allows him to oust rivals and enforce party discipline.

None of that results in the rule of law. And China’s domestic security budget has exceeded that of its military in recent years, even as both grow rapidly, highlighting the nation’s investment in hard power.

I learned in 2016 that Tashi Wangchuk, a young entrepreneur who had spoken to me about his advocacy for broader Tibetan language education, had been detained in his hometown, Yushu, by police officers. In microblog posts, Mr. Tashi had asked local officials to promote true bilingual education, and he had appeared in 2015 in Times articles and video.

Mr. Tashi is the kind of citizen China should value — someone working within the law to recommend policies that would benefit ordinary people and ease tensions. But two years later, Mr. Tashi remains imprisoned. A court tried him on Thursday for “inciting separatism” despite criticism from Western diplomats and human rights groups.

The party’s style of rule threatens to turn sentiments against China even as the empire grows in stature. History teaches us about an inevitable dialectic: Power creates resistance. While the state can bend people to its will, those people meet it with fear and suspicion. The United States learns this lesson each time it over-relies on hard power.

I traveled often to the frontier regions because it was there that the dynamic of power and resistance was most evident, and that I got the clearest look at how China treats its most vulnerable citizens, those outside mainstream ethnic Han culture. No other areas better embody the idea of imperial China. Conquered by the Manchus and reabsorbed by Mao, these lands make up at least one-quarter of Chinese territory. Party officials fear they are like the Central Asian regions under Soviet rule — always on the verge of rebellion and eager to break free.

In October 2016, I quietly entered the sprawling Tibetan Buddhist settlement of Larung Gar and watched the government-ordered demolition of homes of monks and nuns. In parts of Xinjiang populated by ethnic Uighurs, the tension is even greater, fueled by cycles of violence and repression. Uighurs speak in hushed tones of restrictions on Islam and mass detentions. Signs across Xinjiang forbid long beards and full veils, and surveillance cameras are everywhere. On my last reporting trip in China, to the Silk Road oasis of Kashgar, I saw police patrols in riot gear rounding up young men.

An important bellwether is Hong Kong, the former British colony from which my parents emigrated to the United States. On this southern frontier, as in the west, the party works to silence the voices of students, politicians and other residents critical of its rule. Agents have even abducted booksellers. But those moves have actually led to more resistance and strengthened Hong Kong and Cantonese identity. They have also stoked greater fears of Beijing among citizens of Taiwan, the self-governing island that the party longs to rule.

It is not a stretch to say the party’s ways of governance perpetuate a lack of trust by the Chinese in their institutions and fellow citizens. And its international policies light the kindling of resistance overseas, from Australia to Ghana.

Chinese citizens and the world would benefit if China turns out to be an empire whose power is based as much on ideas, values and culture as on military and economic might. It was more enlightened under its most glorious dynasties. But for now, the Communist Party embraces hard power and coercion, and this could well be what replaces the fading liberal hegemony of the United States on the global stage.

It will not lead to a grand vision of world order. Instead, before us looms a void.

China Urges US to Play Constructive Role in Gaza Diplomacy

China’s Warning to Bangladesh on the Quad