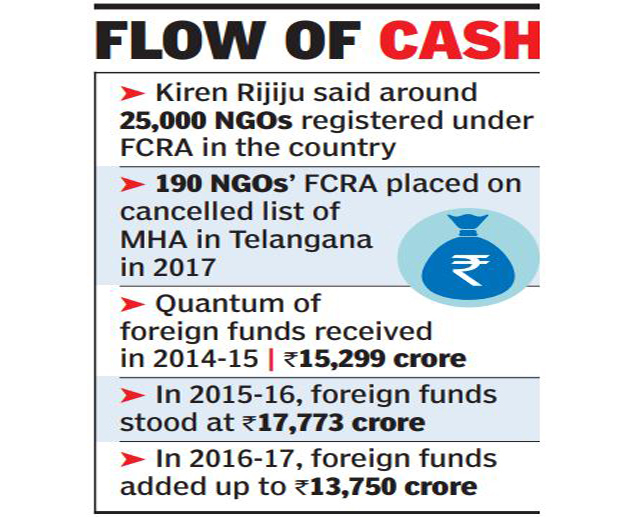 Minister of state for home affairs Kiren Rijiju on Wednesday informed the Rajya Sabha that as per available records over 10,000 NGOs had not filed their annual returns for six financial years (2010-11 to 2015-16) in the country. Stating that there were no penal provisions under the FCRA, 2010, to deal with failure in filing returns, he said action was initiated against the NGOs violating norms. At least, 5,922 NGOs were served notices for failing to file annual returns, and the registration of 4,867 NGOs was cancelled across the country.
In Telangana, FCRA registration of 190 NGOs was cancelled, while 454 NGOs of Andhra Pradesh, highest in the country, lost their FCRA registration.
The Akkineni International Foundation, established in 2004, gives Akkineni Nageswara Rao National Award for film personalities. Akkineni International Foundation also conducts health camps, including in Gudivada, the hometown of the Akkineni family. The Birla Archaeological and Cultural Research Institute was established in 1969 and houses a planetarium, a science museum and an archaeological museum.
Anantapur Medical College Trust, St Ann's Convent, Nirmala Convent were stripped of their FCRA registration by the MHA.