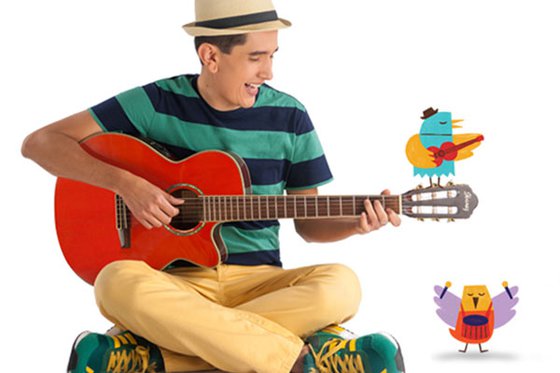 Andrés Salguero, better known as 1-2-3 Andrés, is one of the most exciting new voices on the family music scene in the U.S. and Latin America described as “a rockstar for little language learners” according to Billboard Magazine.

A native of Bogotá, Colombia, Salguero brings to audiences joyful sounds, a passion for bilingualism, and a high-energy love of music that gets kids singing and dancing in Spanish and English.

Salguero started his musical career at a young age when he joined a local folkloric music and dance group. As part of this group, he recorded a full-length album at age 8 and the experience of being in the studio with professional musicians was a defining one.

Later on, Salguero learned to play the guitar from his father and developed a love for the variety of musical rhythms, which led him to also play the clarinet and saxophone in all kinds of musical groups, from an opera company to a ska band. During this time he also started writing his own songs. His carefully-crafted compositions earned him the first prize in the National Composition Contest in Colombia.

Salguero continued to pursue his passion, earning a doctorate in music from the University of Missouri-Kansas City. While in Kansas City, he discovered the world of children’s music, and has dedicated himself to it ever since. He uses his music to celebrate Latin culture, promote the importance of bilingualism, and encourage cultural understanding.

Salguero has since performed at the Kennedy Center, Smithsonian Institution’s Discovery Theatre, Wolf Trap Children’s Theatre in the Woods, the National Theatre and World Cafe Live.

Now local residents can enjoy 1-2-3 Andrés at the Long Island Children’s Museum on Monday, Jan. 15, with shows at 11:30 a.m. and 2 p.m. that will inspire children ages 3 and up to sing and dance while learning about geography, language and Latino culture.

The Long Island Children’s Museum is located at 11 Davis Ave. in Garden City.