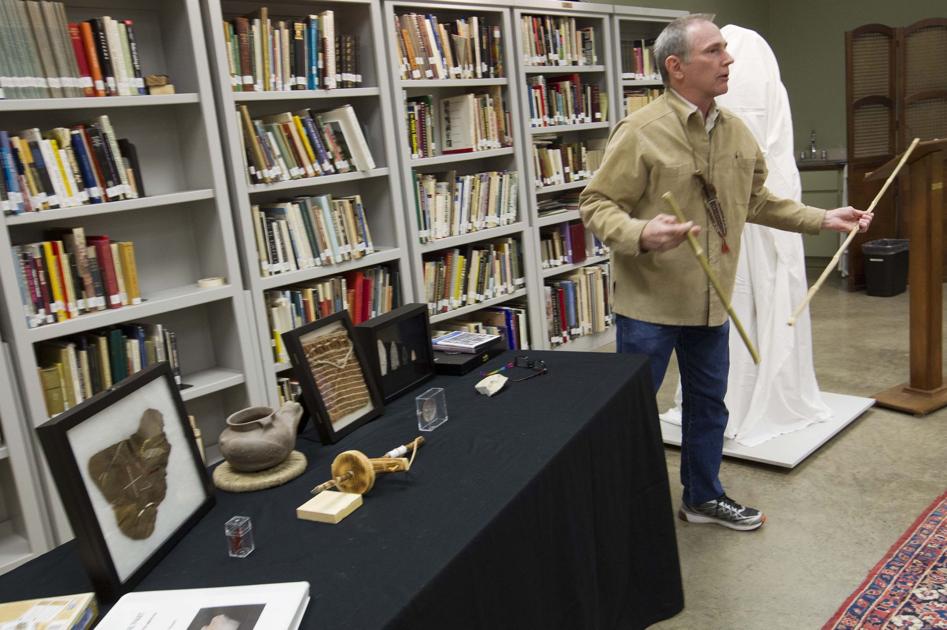 There’s a white sheet covering a large object front and center in the education gallery at the Tennessee Valley Museum of Art.

The room filled with people Mary Settle Cooney, Tennessee Valley Art Association executive director, assembled to witness the unveiling of a historic addition that is key to the museum's educational mission.

There was conversation and laughter as Rep. Johnny Mack Morrow, D-Red Bay, and his wife, Martha, mingled with Tuscumbia Mayor Kerry Underwood and Ken Blackstock of the Colbert County Community Development Commission, as well as representatives from the Junior League of the Shoals, current and past TVAA board members and staff.

The lights flickered to indicate the start of the program, which focused on the importance of preserving the area’s Native American heritage and culminated with the unveiling of a replica of a bandolier strap once owned by local Chickasaw Chief George Colbert.

Buddy Whitlock, a member of the TVAA board of directors, took the podium to greet guests whom he referred to as “important players” in completing the bandolier project.

“Everyone here has been part of this project to some degree for a long time,” Whitlock said.

As Whitlock introduced Cooney, he called her the “driving force” of the art association.

Cooney reiterated the importance of each person in attendance and was moved to tears as she expressed the celebratory feel surrounding the completion of the bandolier project.

“It has been an amazing trip,” Cooney said. “We are so happy to have the opportunity to celebrate our history and the art in our history.”

Cooney retraced the timeline of the day’s unveiling beginning in 1990 when Colbert County brothers Donnie and Robert B. Martin discovered petroglyphs on their property dating back hundreds of years. Their desire to have the significant cultural finds permanently displayed in Colbert County led to the museum accepting the pieces.

“It is impossible to separate art and culture,” Cooney said. “We knew it was our responsibility to provide educational opportunities that would help our community better understand the prehistoric history of the people who lived here.”

In 1998, the Tennessee Valley Museum of Art expanded and a special gallery was added to house the Martin petroglyphs. The addition, in turn, was a catalyst for the Native American portion of the museum’s educational outreach.

The trunks, which were funded by a grant from the Alabama State Council of the Arts, contain accurate reproductions of stone, bone, clay and shell objects that were excavated from sites along the Tennessee River before the flooding after the construction of Pickwick and Wheeler dams. They also have fiber, leather and wood items as well as additional resources to enhance the understanding of culture during that period.

Mary White, who is the area’s representative on the state council of the arts, was instrumental in stocking the trunks and developing lesson plans. The Junior League of the Shoals provided funding for six motif samples used in the trunks.

In 2014, the association’s goal of developing ways to tell the story of southeastern Native Americans — particularly the Chickasaw — was boosted once again by the generosity of another Colbert County native, Goodloe Rutland.

Cooney turned to TVAA systems administrator and curator Jim Berryman, who continued the story of the bandolier strap, sans bag, once owned by George Colbert that was passed down in the Rutland family for 185 years.

“The story I have to tell is fascinating,” Berryman said. “It’s part of our heritage and in ways, it is surprising. It’s surprising how much of Southern culture we inherited from the Native Americans.”

Berryman looked around the room and told the guests they were all underdressed by Native American standards.

Berryman said his first contact with the Rutland family was in 2008 while working on an exhibit for the museum titled “All Dressed Up.”

“This is a very rare artifact,” he said. “The strap was given to an ancestor of theirs by George Colbert. It had previously been on loan to the Birmingham Museum of Art, but Mr. Rutland graciously loaned it to us during that exhibit.”

Berryman said ultimately, Rutland donated the strap to the museum. He said it's delicate and is kept in a controlled environment protected from light, humidity and excessive handling.

Arlene Ashe handmade a motif of the Colbert strap that's included in the educational trunks. Then in 2016, the Tennessee Valley Art Association applied for a grant through Morrow’s CCCD allocations to create a replica of the strap.

The strap and coordinating bag replica were commissioned through that grant and created by Native American scholar from Montevallo, Douglas Rodgers.

"To provide a more accessible view of this period — we contacted professor Rodgers to create a copy of this strap and the original bag using authentic materials and techniques," Berryman said.

The sheet was removed from the object front and center in the room to reveal a lifesize statue in full European-inspired southeastern Native American regalia from the early 19th century.

Rodgers took the podium and discussed the mannequins' attire and explained the purpose of the strap and bag.

"A person as well-dressed as this mannequin would have had a beaded shoulder bag," Rodgers said. "That's what we've done."

Rodgers said it's uncommon to find surviving pieces with the type of beadwork on the strap given to the museum by Goodloe Rutland.

"The strap I have replicated is so rare that I know of only three pieces done in that style — one is here in the museum," he said.

Lookers on gasped and clapped as Rodgers took out his handiwork, placed the strap and bag cross-body on the mannequin making the display a permanent part of the Tennessee Valley Museum of Art.

World watching as Putin arrives in Geneva ahead of much-anticipated summit...

Moscow orders ‘mandatory’ vaccination against Covid-19 for some workers serving the...