Twice rejected by a good art school, photographer R.J. Kern paraphrases Mark Twain: “Never let school interfere with your education,” he says. “I’m a fan of learn-by-trying.” Primarily self-taught, Kern has supported himself shooting weddings since 2012. Now his fine-art career is taking off on the strength of his portraits—of sheep and goats.

It sounds preposterous, but his portraits are exquisite, showing animals as Rembrandt, Rosa Bonheur or John Singer Sargent might have painted them. Last year, he was a finalist for the Taylor Wessing Photographic Portrait Prize. National Geographic featured his work in its November issue. This spring, Kehrer Verlag will release The Sheep and the Goats, Kern’s first monograph.

“I never set out to be a sheep and goat photographer,” Kern says. He explains that to keep photography from becoming “just work,” he has always made time for the “happy, guilt-free pleasure of picking up my camera and going out and making something for myself.” After shooting a wedding in Ireland in 2013, he drove into the countryside to experiment with some new lighting ideas. Any subject would do, and he found sheep, plentiful and uncomplaining. “I was looking at how to find beauty in the common and that was it,” he says.

Kern has taken a practical approach to his career. At Colgate University, he studied art and art history, but also environmental geography because it promised more employment prospects. After graduating in 2000, he worked for five years at National Geographic’s maps division. Then he joined the Bureau of Indian Affairs (BIA) to teach mapping workshops all over the country.

He always carried a camera. Around 2007, he started to learn lighting from David Hobby’s Strobist blog and Joe McNally’s books. Kern studied paintings, then “I would try to reverse engineer the lighting” to see if he could imitate it in his photographs, he explains.

While working for the BIA, Kern started shooting weddings on weekends, and continued to experiment with light. He mastered light painting, multiple exposures using a single flash, and other unusual techniques. “I was always trying to do something different, and rebelling against any formulaic approach,” he says. 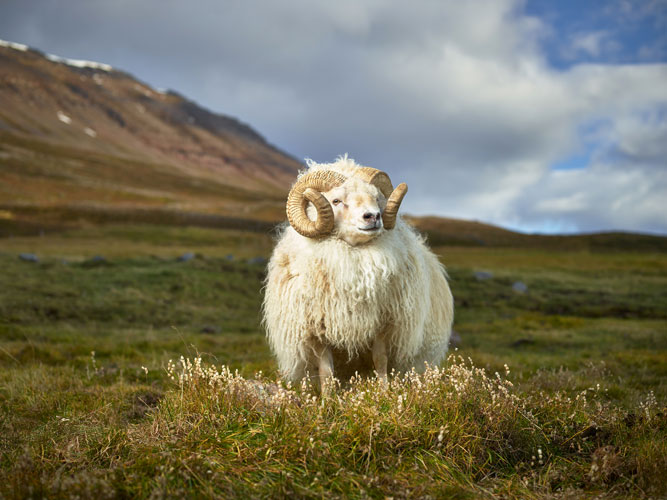 “Mr. Hofsós, Skagafjardarsysla, Iceland.” Kern also shot in Germany and Norway. ”I retraced my ancestral heritage with these goats and sheep,“ he says. © R.J. Kern

Kern also took a disciplined approach to business. He used written contracts for every job. “It’s just a sign of a professional,” he explains. “It’s also a way to manage [client] expectations.” And from his mother, a CPA, he learned to make decisions that kept his business profitable and growing. By 2012, he was supporting himself as a wedding photographer.

“I never shot so many that I didn’t have time for myself,” he says, explaining that he shot 17 weddings at most in a single year.

When he shot sheep for the first time in Ireland, the subject immediately resonated. “I retraced my [Irish] ancestral heritage with these goats and sheep. I always wished I’d grown up on a farm. I was a military brat, and we moved around a lot, and these nomadic animals were a powerful metaphor for my own life,” Kern explains. He also appreciated their symbolism in myths and Bible stories.

In 2013, he took a trip to Norway just to photograph goats and sheep. “I had seen a lot of paintings [of them] in museums that I loved, and that’s where they were painted.” The work he shot in Norway turned into his first project, called “Divine Animals: The Bovidae.”

When he showed that work in a Fargo, North Dakota, coffee shop, he sold two prints for $1,000 each. Encouraged, he spent $5,000 to mount a show in a Fargo gallery. But not a single print sold, and Kern realized he had a lot to learn.

“As an artist, you love the work, and have the expectation that everyone is going to love the work, but that’s different from everyone buying the work,” he says. “Timing is key, and market is key. Fargo is a very small town.”

Kern kept pushing, and won a $10,000 Artist Initiative Grant from the Minnesota State Arts Board. He had proposed to create portraits of animals in their pastures for “Out to Pasture,” his second project. He used the grant money to travel to county fairs so he could connect with people who owned goats and sheep. At the fairs, he set up a portable studio on the sidelines of livestock competitions, to make portraits of kids and teens and their sheep that didn’t win.

Those portraits became another project, called “The Unchosen Ones.” It won the Curator’s Choice Award at the CENTER Choice Awards last spring.

While he was working on those projects, Kern was connecting with other emerging artists for peer critiques and to learn as much as he could about the art photography business. He made some connections as a user group leader for Pictage, the now-defunct online photo storage platform. He also met peers and mentors at industry conferences and portfolio reviews.

“One of my favorite things about portfolio reviews is expanding your peer group, and looking at each other’s work until 1:30 in the morning, critiquing and sequencing and editing, and sharing ideas,” Kern says.

He got ideas and advice about everything from building a website and finding a publisher to landing a gallery, structuring limited editions and pricing his work. “These are things that are vital to artists’ careers that they don’t teach you in art school,” he says.

His own toughest challenge was figuring out how to write a good artist’s statement and talk about his work. His peers served as a sounding board, “and helped to fine-tune the message,” he says. And part of his education, he says, was learning what to delegate to others. He attended workshops with Fraction magazine co-founder David Bram and photographer Martine Fougeron for help editing and sequencing his images, for instance.

All of Kern’s efforts are finally paying off. Last spring at the Photolucida portfolio reviews, he showed his work to Volpe, National Geographic director of photography Sarah Leen, and photography consultant Mary Virginia Swanson.

“Those three ladies have done more in the last year for my career than I would have ever imagined,” he says.

Fine art photographer Stuart Klipper, another one of Kern’s mentors, describes him as “a force of nature…he has a vision of where he wants to go with his work” as well as the business acumen, charisma and self-confidence to get there. Klipper attributes Kern’s success in part to his engagement in “the whole portfolio review world [that] can be tough on some souls.”

Kern’s focus now is on raising money to fund a traveling exhibition that can bring “The Unchosen Ones” to the communities where he created the work. Although Kern continues to shoot weddings, he’s no longer marketing for those jobs. He’s on to new pastures. And sheep and goats, he notes, “don’t complain how they look.”

Want more PDN? Click here to sign up for our email newsletter and get the week’s top stories delivered straight to your inbox.

How To Become a Professional Photographer Without Assisting: Grace Chon