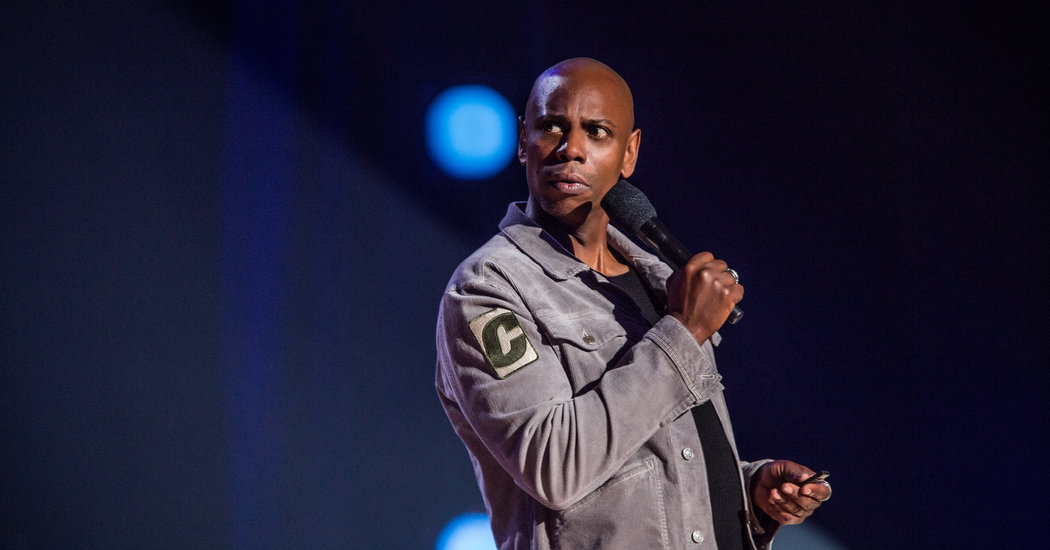 In “The Bird Revelation,” the first comedy special to focus on the #MeToo movement, Dave Chappelle, sitting on a stool at the Comedy Store in Los Angeles in November, pauses to give advice to some comedians in the back. “You have a responsibility to speak recklessly,” he says.

In that special and a second one, “Equanimity,” both released on Sunday by Netflix, he makes a show of hesitating before wading into controversial territory. It’s an old tactic of his, building suspense by suggesting he is about to say something taboo. But it’s worth asking: Just how reckless is Dave Chappelle being these days?

“Equanimity” is a defensive, occasionally hilarious hour, shot in his hometown Washington, D.C., and covering the material that he developed in his monthlong stint at Radio City Music Hall last summer. The real headline is “The Bird Revelation,” which addresses accusations against Kevin Spacey, Louis C.K. and Harvey Weinstein with the conspiratorial tone of someone who wants to tell you what everyone (including Mr. Chappelle) is afraid to say.

Judging by Mr. Chappelle’s stand-up output, however, there are few subjects he is more drawn to than the sexual misbehavior of famous men. He has joked about R. Kelly, Ray Rice, Michael Jackson, Nate Parker and Bill Cosby. Mr. Chappelle’s approach varies, but generally speaking, he denounces the actions and minimizes or mitigates them. (“How old is 15, really?” he asks in reference to Mr. Kelly’s alleged misconduct.) These bits often have the feel of someone digging a hole to prove he can escape, but in this new special, for the first time, they also seem like tired shtick.

Taking long pauses, sounding confessional without being so, Mr. Chappelle performs introspection while resorting to the same old tricks. They appear more clearly here than in the past because the set is so raw and unpolished. Mr. Chappelle didn’t have months to refine his material, smooth his transitions, build the act.

“The Bird Revelation” is one of four specials he released in 2017, and in another of those, “The Age of Spin,” he brings up a rumor that Bill Cosby paid for the microphone that the Rev. Martin Luther King Jr. used in his “I Have a Dream” speech. It was Mr. Chappelle’s way of expressing how hard it is to give up the comic as one of his heroes. In “Bird,” he again leans on the gravitas of King to pivot from the pain caused by sexual misconduct. Mr. Chappelle criticizes the “brittle spirit” of the female comic who said Louis C.K. masturbating in front of her hurt her career, before imagining what would happen if Louis C.K. masturbated in front of the civil rights leader, prompting him to give up his movement.

When suggesting a handsome man wouldn’t be accused of assault and rape, he says that if Brad Pitt did what Mr. Weinstein did, the response would be different. (“Girl would have been like: I got the part.”) But Mr. Chappelle is just rehashing a Chris Rock bit on sexual harassment from the 1990s (“If Clarence Thomas looked like Denzel Washington …”). It’s a joke that has not aged well, and this new version does not do Mr. Chappelle any favors.

Mr. Chappelle opens this special by noting that sometimes the funniest thing to say is mean, and he’s right. Comedy, to quote Steve Martin, is not pretty. But when Mr. Chappelle says some of the sexual assault victims speaking out are now experiencing “buyer’s remorse,” a particularly cruel turn of phrase, this is surely not the funniest thing he can think of. And it is expressed with as little empathy as possible.

Mr. Chappelle — who has always been far more savvy and engaged on race than on gender (his TV series “Chappelle’s Show” flashed a leering teenage sensibility) — is not aiming merely for transgression. He embraces this new movement, calls himself a feminist and offers sober political analysis, with a passionate argument for focusing on structural issues. “You got all the bad guys scared, and that’s good,” he says. “But the minute they’re not scared anymore, it will get worse than it was before. Fear does not make lasting peace.”

This is not a joke. Nor is it reckless. It’s expressing a moderate’s caution and hope for reconciliation in the face of a revolutionary social movement. It’s the same impulse that led Mr. Chappelle, hosting “Saturday Night Live” just after the presidential election, to urge us to give Donald J. Trump a chance. (He has since apologized.) In his current incarnation, Mr. Chappelle often carries himself less like a mischievous outlaw than a comedy statesman. (At the close of Netflix’s “Def Comedy Jam 25,” Mr. Chappelle, who as a young comic criticized how the show set expectations for black artists, delivered a reverential coda about its historical importance.)

Much of his 2017 comedy had a professorial tone, weaving long pocket histories into his act. But in this paradigm-shifting moment, when victims are speaking out and revealing secrets long buried, Mr. Chappelle is ignoring the historical context, the systemic barriers preventing women from speaking up about abuse or succeeding in comedy. It’s perhaps why an audience member off screen balks at one joke, to which he responds: “I know you’re right, baby. I was right once. Remember that?”

For many young viewers, some of whom know him mainly for his much-criticized recent jokes about transgender people, the answer is no. They don’t remember “Chappelle’s Show,” which premiered 15 years ago, or that he quit the series abruptly. At the time, his reasons for leaving were slightly unclear but, because of an interview he gave, were widely seen as involving his discomfort with white viewers’ response to his racial humor rooted in stereotypes. The departure helped cement his reputation as a comic with a social conscience, willing to pass up tens of millions of dollars because of a principle. In 2017, Mr. Chappelle made tens of millions of dollars from his specials, but one wonders how much he cares about why people are laughing at his new jokes.

In an abrupt pivot, he ends this unusually topical special by asking audience members if they want to know the real reason he left “Chappelle’s Show,” a mystery that lost its urgency years ago and suggests a comic nostalgic for old glories. In a funny bit of self-awareness, Mr. Chappelle says he never wanted to be a hero but, rather like Paul Revere, to be known for a single heroic act.

“Paul Revere’s ride was only one night, then 40 years of him being like: Remember that time when everyone was asleep and I was up, and the British was coming?” Mr. Chappelle says, pausing. “Boy, good thing I was awake.”