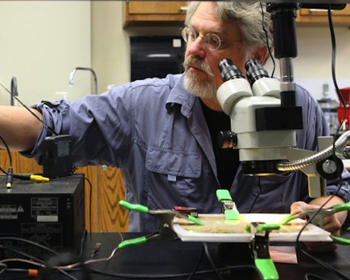 UC Santa Cruz assistant professor of music David Dunn has been selected for a Rydell Visual Arts Fellowship for 2019.

He is one of four local artists who will receive $20,000 grants from the Community Foundation of Santa Cruz County in 2018-19.

The fellowships are awarded solely on artistic merit by a panel of arts professionals from outside the Santa Cruz area. They help individual artists pursue their creative work and are not tied to the completion of any specific project.

Developed with input from the local arts community, the awards were created to honor the wishes of Roy and Frances Rydell, both lifelong advocates of the arts. They established the Rydell Visual Arts Fund at the foundation in 1985 to promote Santa Cruz County artists and arts organizations.

After their passing, the Rydell’s estate was bequeathed to the Community Foundation, with the proceeds of the sale added to the fund, which has since grown to more than $2.4 million. The fund is used to support the arts through grants to visual arts organizations and fellowships to individual artists.

Dunn’s research and practice cross the boundaries between sound, performance, media arts and bioacoustics research. Last year, hereceived a patent in collaboration with two forest scientists from Northern Arizona University to help fight a bark beetle infestation that is killing millions of trees in Western forests.

Dunn holds an M.F.A. in New Media from Danube University, Austria, and is a core faculty member in the UC Santa Cruz Digital Arts and New Media graduate program.

Dunn is also the author and editor of six books and has contributed to more than 100 academic and arts publications. He has received grants from the National Endowment for the Arts, the Ford Foundation, The Foundation for Contemporary Arts, two from the Henry Langlois Foundation, three from the Rockefeller Foundation, and an Alpert Award.

“Roy and Frances Rydell would be proud to see how their support is making a difference for local artists,” noted program director Christina Cuevas. "It was the Rydells’ intent that the visual arts would be supported in perpetuity and that’s what the fund is doing. It is a permanent legacy that benefits everyone in Santa Cruz County.”