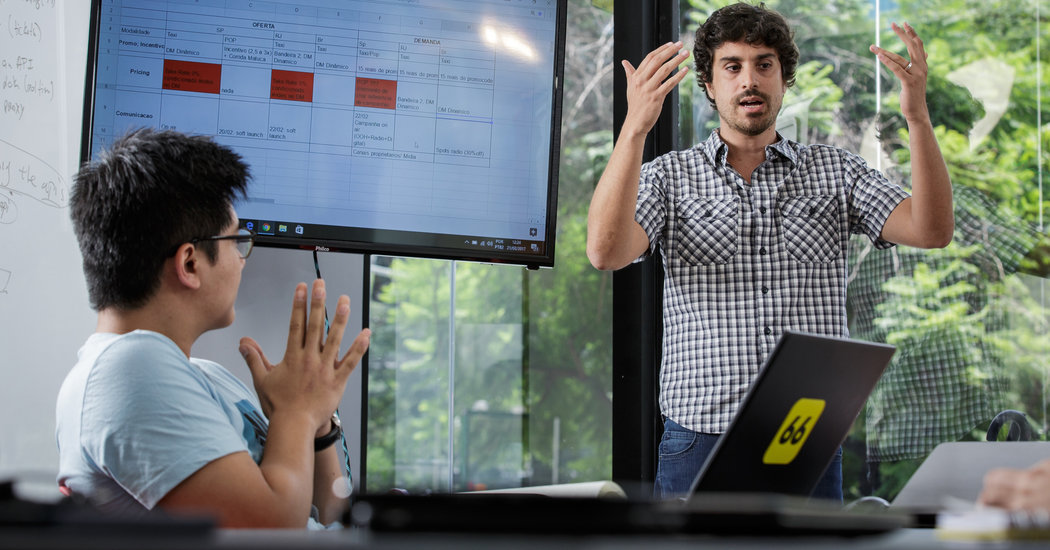 RIO DE JANEIRO — Didi Chuxing, the Chinese ride-sharing company, agreed to acquire full control of 99 — the main Brazilian rival to Uber and a company in which Didi already holds a stake — for around $600 million, according to three people with knowledge of the transaction.

The all-cash deal changes the global competitive landscape for ride-hailing companies, particularly Uber and Didi, the industry’s two biggest players. The companies have been locked in a struggle to be the dominant force in as many regions as possible, with fast-growing markets like South America, and Brazil specifically, seen as huge prizes.

Uber and Didi have teamed up in some countries, including China, but Didi’s decision to buy a major Uber competitor in Brazil puts the companies at loggerheads in Latin America.

The deal also reflects Didi’s effort to accelerate its global footprint outside China. In December, the company raised $4 billion in financing from investors that included the Japanese conglomerate SoftBank, partly to fuel that expansion.

Didi previously owned around 30 percent of 99, according to two people familiar with the matter who spoke on the condition of anonymity because they were not authorized to speak publicly. Members of Didi’s technology and engineering team have been in Brazil working with employees at 99, which is based in São Paulo, for about a year, these people said.

The new deal calls for Didi to pay roughly $600 million for the shares of 99 that it does not already own, giving it complete control of the Brazilian company, the people said. Didi has also agreed to put additional cash into 99. The acquisition will help 99’s previous investors — a group that includes SoftBank, Riverwood Capital, Qualcomm Ventures and Monashees — cash out, representing a rare successful exit for investors in Brazilian internet start-ups.

Peter Fernandez, 99’s chief executive, is expected to stay on at the company, as are other top executives, the people familiar with the transaction said. Brazil is likely to remain the company’s focus, although it may also expand elsewhere in Latin America.

“Globalization is a top strategic priority for Didi,” Cheng Wei, Didi’s founder and chief executive, said in a statement.

Talks between the companies were previously reported by The Information, a technology news website.

With a population of about 210 million and underdeveloped public transportation networks, Brazil is a lucrative market for ride-hailing companies. But the country has moved to create barriers for such services, including legislative efforts to require drivers to show licenses and proof of ownership of the cars they use, although those rules were eventually modified.

99, originally named 99Taxis and founded in 2012, focused initially on working with licensed taxi drivers, taxi unions and government regulators. Uber entered Brazil two years later, and the companies have battled each other since. By the end of 2015, 99 had the most Brazilian users with the app on their mobile devices, according to data from research firm 7Park Data, with another ride-hailing company, Easy Taxi, in second place and Uber in third.

In 2016, 99 had trouble securing additional financing amid an economic and political crisis in Brazil. That year, Paulo Veras, the company’s co-founder and then chief executive, brought on Mr. Fernandez to be chief product officer. Mr. Fernandez later succeeded Mr. Veras and was tasked with finding global strategic partners for 99.

In an interview with The New York Times last May, Mr. Fernandez said: “When I joined the company, my top priority was to reach out to Didi. I was impressed with things Didi was doing in transportation.”

In a statement on Wednesday, Mr. Fernandez said that 99 was “confident that being part of Didi Chuxing will vastly enhance our capability to expand our services throughout Brazil to bring critical value to users, drivers and cities.”

Didi has said it was drawn to 99’s initial approach of working with regulators and taxi drivers instead of against them. In an interview with The Times last year, Stephen Zhu, a senior vice president at Didi, said: “99 shares a lot of similarities with Didi in terms of business model and its evolution. Their culture and philosophy is very similar to ours.”

A version of this article appears in print on , on Page B4 of the New York edition with the headline: Chinese Company Agrees To Buy Uber Rival in Brazil. Order Reprints | Today’s Paper | Subscribe