A team of Princeton astrophysical researchers and a neurobiologist who is a graduate alumnus were among the recipients of this year’s Breakthrough Prizes, one of the biggest awards in science. Professors LYMAN PAGE JR. and DAVID SPERGEL ’82 and senior research physicist NORMAN JAROSIK were honored Dec. 3 for their work on the Wilkinson Microwave Anisotropy Probe NASA satellite, launched in 2001. They share the $3 million prize with the other 22 members of the WMAP team, which includes Professor Jo Dunkley and 13 former Princeton postdocs and students. The project “improved our knowledge of the evolution of the cosmos and the fluctuations that seeded galaxies,” the citation said.

DON CLEVELAND *77, a neurobiologist at the University of California, San Diego, was honored for identifying one of the pathways responsible for ALS, or Lou Gehrig’s disease.

A video that aired Nov. 26 on Iranian television focusing on XIYUE WANG — a Princeton graduate student arrested in Tehran in August 2016 and sentenced to 10 years in prison for espionage — prompted new calls for the U.S. government to take action.

On Dec. 5, President Eisgruber ’83 sent a letter to President Donald Trump urging him to “take any feasible additional steps” to secure Wang’s release. Wang’s wife, Hua Qu, also implored Trump to intervene. During an interview with NBC News, she said Wang was “extremely stressed, he has depression, and he attempted to commit suicide.” Graduate students held a Dec. 11 phone-a-thon, contacting senators on the Foreign Relations Committee.

The Iranian video suggested that Wang, a fourth-year graduate student in history, was using his research to spy on Iran with the support of the U.S. government. The University responded that the video was “filled with false and misleading statements” and that Wang was simply doing research for his dissertation. 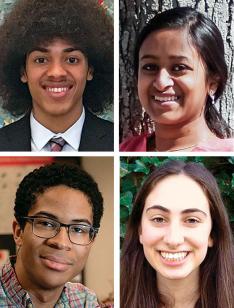 Marshall scholar SHRUTHI RAJASEKAR ’18, of Plymouth, Minn., a music-composition major pursuing certificates in vocal performance and cognitive science, will work toward a master of arts degree in the Guildhall School of Music and Drama’s opera-making and writing program and a master of music degree in ethnomusicology at the School of Oriental and African Studies at the University of London.

HANS HANLEY ’18 of Windermere, Fla., and JENNIFER SILVER ’18 of Cherry Hill, N.J., are recipients of the Sachs Scholarship, named for Daniel Sachs ’60 and one of Princeton’s highest honors.

Silver is concentrating in religion and specializing in the study of Southeast Asia. She will pursue a master’s degree in Southeast Asian studies at the National University of Singapore.

In addition, SAMUEL BARNETT, a student at Worcester College at Oxford, received a Sachs Scholarship from Worcester to study for a year at Princeton’s Graduate School.

Oscar Arias, former president of Costa Rica and winner of the Nobel Peace Prize, was the keynote speaker as PRINCETON IN LATIN AMERICA celebrated its 15th anniversary in November at the Princeton Club of New York City. Arias emphasized the importance of service in a violent world: “PiLA fellows have seen firsthand the insanity of addressing problems … by treating only the symptoms,” Arias said. “This program is building the spokeswomen and spokesmen that the world needs.”

Conceived by Daniel Pastor ’03, Allen Taylor ’03, and the late Professor Paul Sigmund, the program has placed more than 360 fellows with local organizations in 20 countries. Executive director Michael Stone said PiLA has seen “an increasing number of Latin American heritage applicants, typically first-generation college students in the U.S. who have roots in Latin America.”