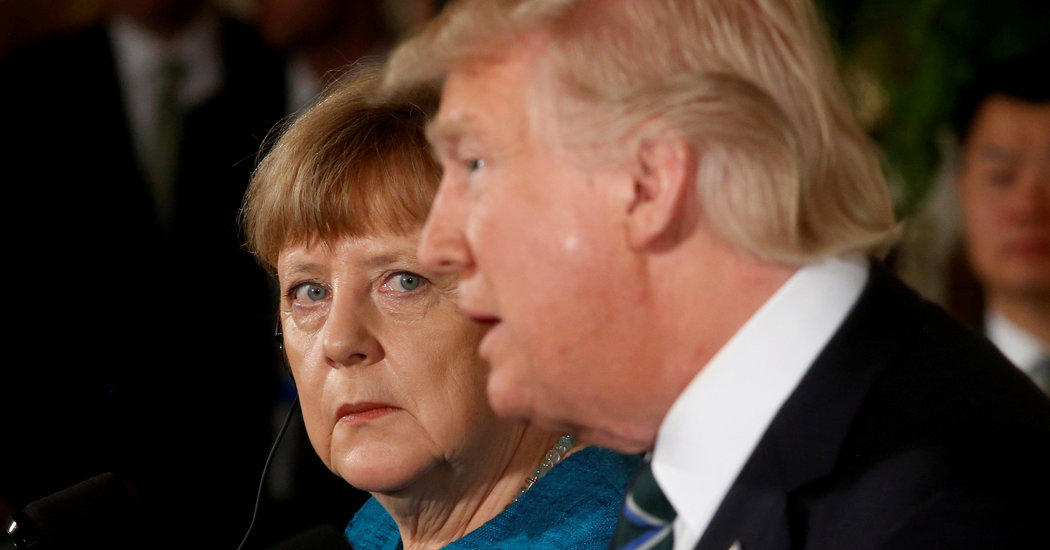 BERLIN — It has been almost a year since Donald Trump took office, and Germany is still debating what, exactly, his administration means for Europe. Is Mr. Trump just a hiccup in the American political system or an indicator of a chronic disease? Will the trans-Atlantic relationship ever be the same again or is it time Germany and Europe prepared for a post-Atlantic era? But rather than providing insight into the future of the United States, the debate is turning into a Freudian analysis of Germany’s own troubles.

It started in May, when Chancellor Angela Merkel, shocked by Mr. Trump’s first visit to Europe as president, said that “the times we can fully rely on others are somewhat over” and that Europe had to become more self-reliant. Since then, two factions have formed: those who believe Germany can wait out Mr. Trump and then return to normal and those who call for a strategic shift because they think the days of American leadership are over.

The first faction is represented by a group of foreign policy experts who published a “Trans-Atlantic Manifesto,” which appeared in October in The New York Times and the German weekly newspaper Die Zeit. They argue that guarding the trans-Atlantic relationship is crucial to the liberal world order and that a firm trans-Atlantic commitment gives Germany the liberty to act as a leader in Europe without stirring old fears of German predominance. They find supporters in conservative policymakers such as Norbert Röttgen, the head of the Bundestag’s external affairs committee. He, too, stresses that mutual values, not just mutual interests, constitute the trans-Atlantic relationship.

The other side is represented by Germany’s acting foreign minister, Sigmar Gabriel, a Social Democrat. In a speech at a foreign policy forum in Berlin in December, he stated flatly that “the relations between the U.S.A. and Europe won’t be the same anymore — even when Donald Trump leaves the White House.” He called for Germany to reconceive its strategic posture and to plan for a new era when it could no longer rely on American leadership.

Niels Annen, a leading Social Democrat and a member of the Bundestag, agrees. He cites the president’s isolationist core constituency, the destruction of America’s political culture and the cuts to the State Department as long-term threats to American power. He also believes that the recently passed tax cuts will further erode American society from within, knocking down a middle class that was long a bulwark for America’s activist foreign policy. “We should not write off the United States, of course,” he said. “On the contrary, we have to increase our efforts to work with policymakers in Washington and in the federal states. But we have to be realistic as to what to expect.”

It’s a strange debate, in that it is both hypothetical and emotional.

It is hypothetical, because economically, Germany and the United States remain close business partners, despite the failure to establish a trans-Atlantic trade deal and the shifting orientation of both economies toward China.

Militarily, Germany and Europe depend on the United States, too, still ducking under its nuclear umbrella. True, the European Union has recently taken steps toward military cooperation and independence, but there is neither the will nor the resources to provide the level of protection that America still offers. While many German voters probably feel flattered by the talk of their country’s leading role in the world, the majority is still not willing to accept the cost. Germany is an aspiring power that lacks both the public support and the strategic culture to live up to the expectations.

And yet, the debate over where, exactly, German-American relations are headed is passionate, and sometimes angry. It is not just about budgets and defense plans; it is also an emotional issue, a question of love and dependence and letting go. Many Germans still look fondly to America; we study there, travel there, have family there, buy clothing and food and music from there, and will continue to do so, whoever is president.

Today, though, there is a new current of anti-Americanism rising as well, different from the usual continental grumblings. It believes that America has overstayed its welcome on the world stage, that it still insists on dominating both culturally and politically. It believes that American culture is superficial and phony, that Americans are hypocritical and uneducated. “What good has ever come from the United States of America?” a reader in Berlin wrote to me recently in response to an editorial.

The roots of this new anti-Americanism go deeper than Mr. Trump. Germans point to George W. Bush’s invasion of Iraq and war on terrorism, and to Barack Obama’s tendency to overpromise American action on foreign policy while furthering many of his predecessor’s worst policies. But finally, in Donald Trump, we have a cartoon bad guy, the essence of every anti-American prejudice: a rude, uneducated bully who drinks giant amounts of Diet Coke.

Hardcore anti-Americanism is still a minority view in Germany. A study published last year, before Donald Trump became president, found that about 10 percent of Germans hold such views. Very few policymakers apart from the radical fringes are openly anti-American.

Still, it can be found lingering underneath the surface of the current debate — for example, when Mr. Gabriel said that Germany “needs to seek a strategic relationship, not submission to U.S. politics, as we have never seen it in the past.”

Social Democrats have always played on the theme of the European David against an American Goliath, but this time it seems to be catching on elsewhere. Anti-Americanism is not just an opportunity to vent. It also serves as an outlet for the insecurity of a nation faced with a new global environment that seems to demand radical change, while practically speaking, radical change is impossible.

As a world player, Germany can act only through Europe, the British historian Timothy Garton Ash writes. But as it does so, it is inhibited by the inertia of masses in movement, the other 26 European Union states. Germany must fill the post-American vacuum; Germany cannot fill the vacuum. Talk of a strategic shift is a reverie — a way to escape the limitations to real action.

Anna Sauerbrey is an editor on the opinion page of the newspaper Der Tagesspiegel and a contributing opinion writer.