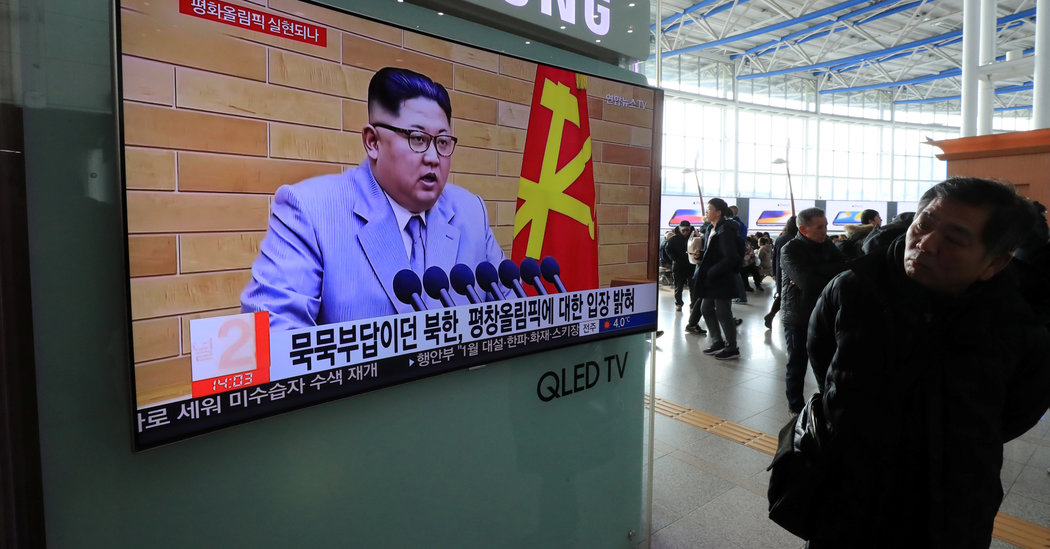 Here’s what you need to know:

• The Korean thaw appears to be moving rapidly.

South Korea is waiting to hear whether North Korea will agree to high-level talks next week, which Seoul proposed after an unexpected New Year’s outreach from the North’s leader, Kim Jong-un. It would be their first official dialogue in two years.

We’ve analyzed Mr. Kim’s speech. But his appearance — carefully coifed, in a Western-style suit — also made a statement.

•Iran’s supreme leader blamed the country’s “enemies” for the wave of deadly protests that have gripped the nation since last week.

Ayatollah Ali Khamenei, who has been a target of the protesters, did not identify those foes, but said he would “speak to the dear people when the time is right.”

At least 21 people have died in the protests and clashes with security forces, and hundreds have been arrested.

• “Nightmares that the military is chasing me” plague a 12-year-old Rohingya girl who survived being shot as she fled Myanmar to Bangladesh. But 14 members of her family — including her mother, her father and four of her siblings — were killed.

For hundreds of thousands like her, the horror isn’t over. More than half of the estimated 655,000 Rohingya refugees are minors, and perhaps one-third are younger than 5, like the girl being carried by her mother above. An aid official called it “the perfect breeding ground for a massive mental health crisis for children.”

• The Senate returns to work today with a narrower Republican majority, and with much of the country locked in bone-chilling, record cold temperatures. Above, Niagara Falls.

And it didn’t take long for President Trump to make his first “Crooked Hillary” Twitter post of the New Year.

Mr. Trump accused a former Clinton aide, Huma Abedin, of “disregarding basic security protocols,” and called his own Justice Department a “deep state,” a term that typically refers to a shadow government that plots to influence politics.

• The reckoning over sexual harassment is reshaping U.S. culture.

Peter Martins, who led the New York City Ballet for more than three decades, stepped down, while rejecting accusations of harassment and physical and verbal abuse.

Gretchen Carlson, who spoke out against sexual harassment at Fox News, will lead the board of the Miss America pageant — a competition she won in 1989.

But our food critic, Pete Wells, says that revelations are playing out “excruciatingly slowly,” if at all, in the restaurant world.

•And a note from our new publisher.

Addressing readers of The Times, A.G. Sulzberger explains his approach to the job in “a period of profound challenge,” when “misinformation is rising and trust in the media is declining.” Read his comments here.

He’ll also be answering readers’ questions. You can submit yours here.

• Jinri Toutiao, a Beijing-based, A.I.-driven news app with more than 120 million users, moved fast after a warning from China’s top censor. It suspended 1,100 bloggers and devoted a new section to state media coverage.

• Our DealBook columnistlooks at 2017’s biggest deals and biggest winners. The DealBook team also took a look at key story lines for the next 12 months, from trade fights to Uber to North Korea.

• Addiction Inc.Our multipart series examines the booming industry of addiction treatment in the U.S., worth $35 billion a year but haphazardly regulated and poorly understood.

• Oil prices hit their highest point since 2015 and U.S. stocks were up. Here’s a snapshot of global markets.

• China’s demand for donkey hides, to produce a traditional remedy called ejiao, is not only disrupting Africans’ livelihoods; some researchers see a potential crisis “throughout the rest of the world.” [The New York Times]

• An Australian former deputy prime minister, Tim Fischer, accused the U.S. of a “diplomatic insult” by failing to appoint an ambassador in Canberra for nearly 18 months. He also suggested tensions would worsen over an Australian diplomat’s role in setting off the U.S. investigations of Russian collusion with the Trump campaign. [The Sydney Morning Herald]

• “It was going down fast.” Would-be rescuers described desperate attempts to save those aboard a seaplane that crashed near Sydney, killing a British executive and five others. [ABC]

• In Israel, an emboldened right wing is signaling its intention to doom a two-state Mideast solution. [The New York Times]

• “I was misguided.” A YouTube star with millions of followers apologized for posting a video that showed a dead body hanging from a tree in a Japanese forest known for suicides. [The New York Times]

• A dentist in Taiwan was ordered to pay his mother, who financed his education, nearly $1 million. [The New York Times]

Tips, both new and old, for a more fulfilling life.

• Scientists may finally understand why fiber is good for us.

• Start the new year by relaxing and centering yourself.

• Recipe of the day: Try pan-roasted cauliflower with garlic, parsley and rosemary.

• Turtle hatchlings tackle a treadmill. Their stop-and-go crawling keeps them fresh for the big swim to the Gulf Stream.

• Here’s a breakdown of 2017 in visuals and graphics, from what a single photo told us about North Korea’s nuclear program to “zombie malls” and Chuck Berry’s rock ’n’ roll hits.

“Charlie Brown, Snoopy, Linus, Lucy … how can I ever forget them?”

Those were Charles M. Schulz’s parting words in the final daily “Peanuts” comic strip, which ran 18 years ago today.

They recalled a slightly less sentimental line from the strip’s debut, nearly 50 years earlier, in which a carefree Charlie Brown strolls by a pair of children.

That juxtaposition of earnestness and wry humor made “Peanuts” a pop-cultural mainstay for half a century, reaching 75 countries in 21 languages at its peak.

Mr. Schulz, shown above in 1966, insisted on producing every aspect of the comic, making himself inseparable from his characters.

“I want it to be my words in everything I do,” he told The Times in 1967. “I’ve thought of it — hiring someone to help. Sometimes I think it would be nice. But then — what would be the point?”

When colon cancer forced Mr. Schulz to end the daily strip in 2000 at age 77, The Times invoked a dismal Charlie Brown, mourning the end of the baseball season: “There’s a dreariness in the air that depresses me.”

Mr. Schulz died a month later, but all 17,897 “Peanuts” strips would be anthologized over the next two decades.

We have briefings timed for the Australian, Asian, European and American mornings. And our Australia bureau chief offers a weekly letter adding analysis and conversations with readers. You can sign up for these and other Times newsletters here.

India had nearly half of worldwide coronavirus cases last week

British woman killed in Pakistan ‘after refusing to marry a man’