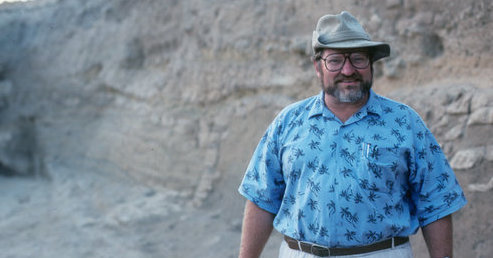 Lawrence E. Stager, a pre-eminent American archaeologist who unearthed evidence that anxious ancient Israelites sinned by worshiping a “golden calf,” just as the Bible said, and who helped redeem the vulgar reputation of Goliath and his fellow Philistines, died on Friday at his home in Concord, Mass. He was 74.

The cause was injuries from a fall, his daughter, Jennifer Stager, said.

Captivated while excavating an Israeli site on a postgraduate fellowship, Dr. Stager decided against a legal career to pursue biblical archaeology. He donned an improvised fedora and packed a Bowie knife to became a rumpled, roly-poly incarnation of Indiana Jones.

The four-and-a-half-inch-long icon, found by Dr. Stager’s team as it cleared rubble at a ruined temple in Ashkelon, on the Mediterranean Sea south of Tel Aviv, was similar to the golden idols that God inveighed against in Old Testament accounts of the 40 days that Moses spent on Mount Sinai receiving the Ten Commandments.

The stunning discovery squared with the earliest legends of Judaism and biblical accounts of Jerusalem’s rivalry with the calf-worshiping Hebrew king Jeroboam.

Dr. Stager’s team found the calf during an excavation he oversaw as the director of both the Semitic Museum at Harvard, where he was an archaeology professor, and the Leon Levy Expedition to Ashkelon, which was underwritten for more than 30 years by Mr. Levy, a New York investor and philanthropist, and his wife, Shelby White.

Dr. Stager believed that by condemning the worship of calf deities, the early Israelites were seeking to purge their forebears’ Canaanite influence and establish themselves as a separate people.

In 2016, Dr. Stager and Daniel M. Master, a former student of his who is an archaeology professor at Wheaton College in Illinois and was a director of the Ashkelon dig for a decade, made what they described as another one-of-a-kind discovery: a Philistine cemetery.

“The uniqueness of Ashkelon,” Dr. Stager said at the time, “is that we now have both places where we can study the living and the dead.”

Coupled with earlier discoveries in Ashkelon of painted inscriptions that represented a form of writing, the colorful pottery and other artifacts found at the 3,000-year-old burial site suggested that the Philistines were artistic and cosmopolitan and that it was unfair to equate, them with boorishness and barbarity.

“Stager has been a formidable influence upon the history and archaeology of the Eastern Mediterranean and the Levant for more than 30 years,” Jeff Hudon, a biblical historian, wrote in the journal Seminary Studies in 2010, “both through his own research and indirectly through his students.”

Larry Elwood Stager (he adopted the first name Lawrence while studying at Harvard) was born on Jan. 5, 1943, in Kenton, Ohio, to Francis Stager, a farmer, and the former Marcella Mae Wilson.

Growing up about 50 miles northwest of Columbus, he was recruited by the Harvard Club of Dayton to become the first member of his family to attend college.

After his wife, the former Susan Simmons, and his mentor, Professor G. Ernest Wright, submitted a job application on his behalf while he was off on an excavation, he was hired to teach in 1973 at the Oriental Institute of the University of Chicago.

He returned to Harvard in 1986 as the inaugural Dorot professor of the archaeology of Israel. He retired in 2012 as professor emeritus.

In addition to his wife and his daughter, Dr. Stager is survived by a son, David, and four grandchildren.

Before joining the Levy expedition, which was conducted under license from the Israel Antiquities Authority, Dr. Stager directed digs in Carthage, Tunisia, and Idalion, Cyprus.

He dodged friendly fire at a military proving ground in the Buqe’ah Valley to study ancient farms in the Judean desert.

And he teamed up with the maritime archaeologist Robert D. Ballard in 1999 to explore Phoenician shipwrecks dating from 750 B.C., vessels that sank with hundreds of wine amphoras aboard that were being shipped to Egypt from Tyre in Lebanon. Their discovery was featured in a National Geographic Society documentary, “Lost Ships of the Mediterranean.”

Dr. Stager was also credited with coining the term “port power” to explain the impact of maritime trade as an urban magnet during the Bronze Age.

In the early 1980s, the Rev. Philip J. King, president of the American Schools of Oriental Research, introduced Mr. Levy and Ms. White, two of his trustees, to Dr. Stager, whom Professor King considered a creative and undoctrinaire researcher — just the right person to pursue the Israeli historian Benjamin Mazar’s goal of revealing the sequence of civilizations layered beneath a nondescript field in Ashkelon, which was the region’s largest port.

Dr. Stager’s field research focused on Canaanites, Phoenicians, Philistines and Israelites as he studied the origins of monotheism and amassed hard evidence of ancient life.

Many of those findings were featured in “Life in Biblical Israel” (2001), which Dr. Stager wrote with Professor King.

“Larry had an awful lot of originality that colleagues never thought about, wasn’t one to borrow from others, and shared the information he found,” Professor King said in a phone interview.

At his death, Dr. Stager was editing the final volumes detailing technical findings of the Ashkelon expedition for the Shelby White-Leon Levy Program for Archaeological Publications at Harvard and the Harvard Semitic Museum.

Unlike some of his colleagues, Dr. Stager never shied from the controversy that comes with challenging conventional wisdom or trying to reconcile archaeological finds with biblical legends.

He scoffed at the view that Jesus was born in Bethlehem, rather than Nazareth. He suggested that accounts of the destruction of Jericho by Israelites might have been a “literary embellishment” of a pastoral migration punctuated by sporadic armed conflicts.

“As he saw it,” Professor Master said in an email, “the Bible and archaeology were intertwined — not as some sort of apologetic exercise, but as a critical frame of interpretation.”

A version of this article appears in print on , on Page B10 of the New York edition with the headline: Lawrence E. Stager, 74; Led Excavations in Israel. Order Reprints | Today’s Paper | Subscribe