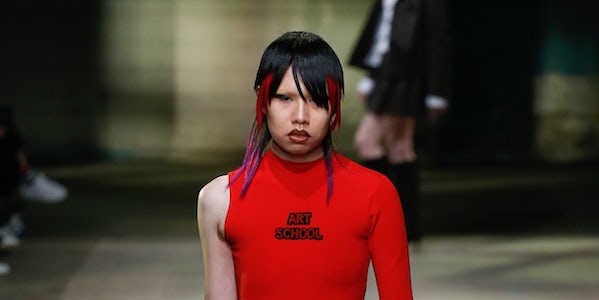 LONDON, United Kingdom — The MAN show is Fashion East’s incubating platform for emerging designers at the start of their careers, as well as a staple of London’s menswear schedule. That said, perhaps its name is somewhat disparate to its current incarnation as a new generation of designers take a gender-neutral stance, which is no bad thing.

First up was Rottingdean Bazaar, the witty label by Luke Brooks and James Theseus Buck, which explores the banality of clothes and the absurdity of fashion. Based in Rottingdean, a small town in East Sussex near Brighton, the duo are far away from London’s notorious fashion scene. Their collection opened with one of their local neighbours, a man who walks the streets selling pamphlets and novel souvenir items. He was dressed in his own clothes, it seemed, but it set the tone for a wonderfully weird and whacky line-up.

Brooks’ father, a portly man, followed in a t-shirt that exclaimed ‘We Do Big Sizes’ and ‘We Do Very Small Sizes!’ with a miniature t-shirt attached. One look was entirely made of stickers arranged as jeans and a rugby shirt, which floated off the model as he walked. Local performer ‘Charity Shop Sue’ had a “personalised cheese board” attached to her sweatshirt, worn with run-of-the-mill skinny jeans. British artist Julie Verhoeven wore a couple of dartboards arranged like a snowman, covered in words referring to mundane objects and fashion-y terms like ‘smokey eye’ and ‘white shirt.

What did it mean? The designers said it was sheer fun, but it also construed an observation of how designers work: throwing a dart on random concepts and passing it off as creative genius. The things that came closest to something that could be transported to the shop floor were sweatshirts with shredded flags and badges with images of sequins. The rest of the collection consisted of synthetic joke shop costumes — dinosaurs and ‘Fat Bastard’ from Austin Powers, for example — that the designers turned into bubbly garments by tying two pence coins into them and boiling them in a huge pot.

Brooks and Buck have a distinctly British sense of silly humour. The final model carried a cardboard cut-out of Naomi Campbell, an icon of an era when conventional beauty would sell product (they initially tried to tie the cut-out to a remote control car so they could have cardboard Campbell model in the show). Taped on the model’s back was a sheet of paper with ‘Fin’, affirming the idea that this is show — not a commercially-minded collection. It was a laugh-out-loud moment that would perhaps only ever be tolerated in London, and as the finale came out to ‘I’d Like to Buy the World a Coke’, it became clear that they did just that.

Self-describes queer label Art School is known for its rainbow-hued shoes and individualistic casting. This time, the duo chose to draw on queer filmmaker Derek Jarman’s ‘Chroma’, a meditation on colour, as well as the close-to-the-body style of a young Gwen Stefani and Donatella Versace. The diverse casting, predominantly trans women, was inspiring, but the bright clothes ran the risk of being sidelined. The collection was filled with ideas, but may benefit from depth, not breadth, and a sharper focus on a more linear narrative, sartorially-speaking.

Last but not least was newcomer Stefan Cooke, who only graduated from Central Saint Martins last year and works with his partner Jake Burt. Just over five weeks ago, Cooke won £45,000 ($61,000) as part of the H&M Design Prize, and in true London style, he rustled up a collection and headed straight for the catwalk.

Cooke printed photos of garments onto streamlined elastic leggings and fine knits for a trompe l’oeil effect, which he describes “a celebration of the ease that technology can bring.” From afar, the garments appeared to be straightforward trousers or knits in simple shapes. Upon closer inspection, strips of printed elastane were crisscrossed into a basket weaves and re-pieced with the effect of slight distortion. The knitwear was made from shredded polyester that had been printed. Tailored trench coats were actually made from harlequin panels, loosely hand-stitched together. Ditto for the check tailoring.

What was clever about it was that it riffed on the idea of a digital image on an intricately constructed garment, and familiar motifs turned into something uncannily transformed. The flat, two-dimensional quality was offset by layers of thought and technique, sort of like a technological device – an iPhone or laptop, for instance. It’s clear that Cooke is one to watch.