In the footage, a team of divers can be seen observing a wreckage at the bottom of the seabed.

Fish scramble as the team explore the remains of what is reportedly a Dutch warship from the 18th century.

Using tape measures and other scientific devices, the group record their findings on a clipboard. 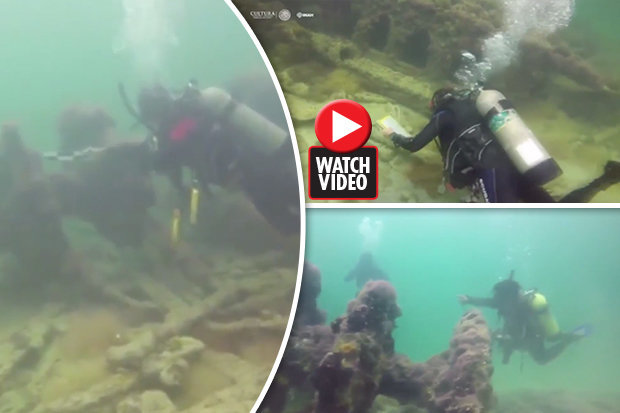 Twelve 8.2ft (2.5 metres) long iron cannons were discovered in an area off the Madagascar reef, some 22 miles northwest of Mexican seaport town Sisal.

The cannons, which measure almost half a metre in diameter, were apparently last used by Dutch servicemen in the 1800s.

“[They] bear a resemblance to the artillery of the Dutch war frigates that sailed the West Indies in the 19th century,” revealed Helena Barba Meinecke, head of Sub-Directorate of Underwater Archeology (SAS) team.

A visual examination of the site led the team to believe that four of the cannons were thrown overboard by the crew in an effort to shift weight from the sinking ship.

Meinecke also revealed the shear size of the wreck, explaining how it “must have weighed more than 300 tons”.

The explorers also came across what appeared to be a British steamboat – believed to have been used in the 1900s for private parties among the rich and famous.

Originally posted on video-sharing platform Liveleak, viewers were quick to show their amazement for the unique discovery, while also expressing concerns.

One comment read: “Good find, but I was worried if a school of sharks was going to be part of this expedition.”

Another added: “I’d be afraid of something blowing up.”

This footage comes less than a month after an ancient biblical city was discovered intact underwater.