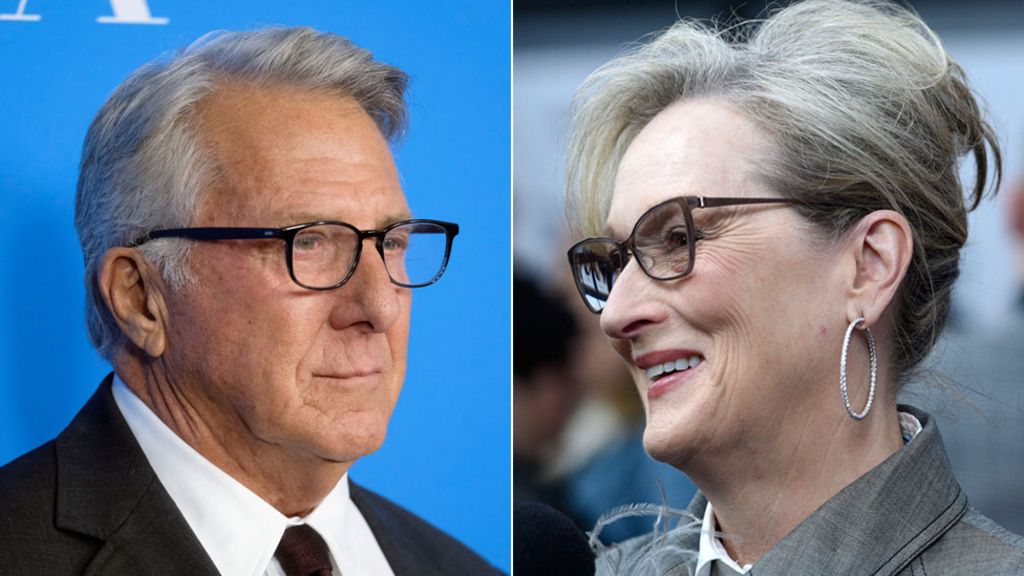 Meryl Streep has said Dustin Hoffman "overstepped" the mark when he slapped her face on the set of her fifth film.

It happened while they were shooting a scene for Kramer vs Kramer – and Streep says she had no prior warning.

Speaking to the New York Times, she also addressed claims she was "deliberately silent" over accusations made against Harvey Weinstein.

Streep, being interviewed alongside Tom Hanks about their new film The Post, added: "I want to hear from her.

"She has so much that's valuable to say. And so does Ivanka. I want her to speak now."

Referring to the 1979 scene with Hoffman, Streep said: "This is tricky because when you're an actor, you're in a scene, you have to feel free. I'm sure that I have inadvertently hurt people in physical scenes. But there's a certain amount of forgiveness in that.

"But I think those things are being corrected in this moment. And they're not politically corrected; they're fixed. They will be fixed, because people won't accept it anymore. So that's a good thing."

Hoffman has previously said he was getting a divorce while shooting the film – about a divorce.

"I'm sure I was acting out on her [Streep] throughout the movie," he told the Huffington Post. "Stuff that I was feeling toward the wife that I was divorcing in real life."

Hoffman has been accused of sexual misconduct by several women. He has apologised to the first to come forward, author Anna Graham Hunter, saying: "I have the utmost respect for women and feel terrible that anything I might have done could have put her in an uncomfortable situation. I am sorry. It is not reflective of who I am."

'Respect us as equals'

Streep, who has starred in several Harvey Weinstein films, also referred to the scandal which has engulfed the film producer.

Last month, she offered a robust defence to an accusation by actress Rose McGowan, who suggested Streep had been deliberately silent about Weinstein.

McGowan has alleged that she was raped by Weinstein.

Streep said in the New York Times interview: "I really had to think (about the Weinstein allegations). Because it really underlined my own sense of cluelessness, and also how evil, deeply evil, and duplicitous, a person he [Weinstein] was, yet such a champion of really great work.

"You make movies. You think you know everything about everybody. So much gossip. You don't know anything. People are so inscrutable on a certain level."

She added: "And it's a shock. Some of my favourite people have been brought down by this, and he's not one of them."

Weinstein has denied all allegations of non-consensual sex made against him.

Streep said she had "experienced things" in the industry when she was younger – saying there was a lot of "inexcusable" behaviour at the time.

"I was really beaten up, but I don't want to ruin somebody's mature life," she said. "I just don't. I do think if the world is going to go on, we have to find out a way to work together, and know that it's better for men if they respect us deeply as equals."

Woman learned birth mother was star on ‘That’s My Mama’

Ready to head to the movie theater? Here’s what to see this weekend