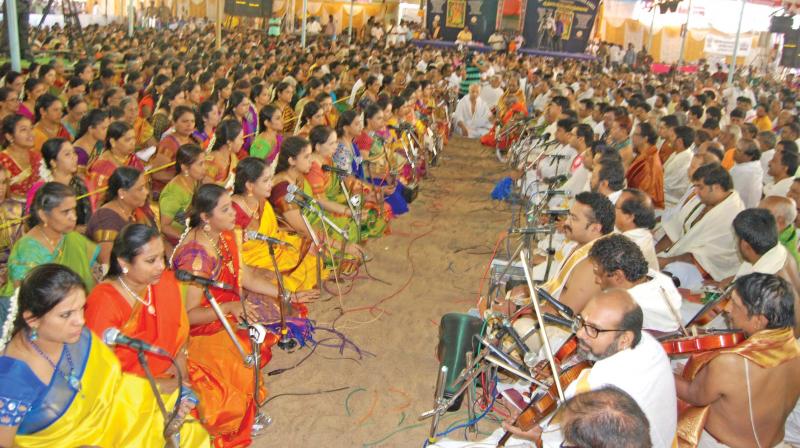 THANJAVUR: Hundreds of musicians paid their homage to saint-composer Sri Thyagaraja by singing his Pancharathna Kritis (compositions considered as five gems) at the 171st ‘Aradhana’ of the saint at his ‘Samadhi’ on the banks of Cauvery at Thiruvaiyaru near Thanjavur on Saturday. The ‘Aradhana (singing in chorus)’ is held every year on Pushya Bagula Panchami day, when the saint attained ‘Samadhi’.

It was a divine experience for people who watched the singing which started at 9 am and went on for an hour. Nathaswaram recital and playing of flute preceded the chorus singing. The ‘kritis’ sung in chorus were “Jagadanandakaraka” in Nattai Ragam, “Dudukugala” in Gowlai Ragam, “Sadhinchene” in Arabhi Ragam, “Kana Kana Ruchira” in Varali Ragam and “Entharo Mahanubhavulu” in Sri Raagam-all the kritis set to ‘Adhi Thaalam’.

Earlier, an ‘unchavruthi bhajan’ procession was taken from the house of Sri Thyagaraja on Thirumanjanaveedhi to the ‘Samadhi’. The Idol of Thyagaraja was taken in a procession with Mallari in the evening.

This year the ‘Aradhana’ started on January 2 and Tamil Nadu Governor Banwarilal Purohit inaugurated the festival. Famous musicians like K.J.Jesudoss paid their homage to the saint during the festival.

Born on 1767 at Tiruvarur, saint-composer Sri Thyagaraja settled down at Thirumanchana Veedhi at Thiruvaiyaru, where he lived till he attained ‘Samadhi’. He composed countless kritis in a rich variety of rare and common ragas. ‘Rama Bhakthi’ and ‘Nadopasana’ are the two cardinal features of music of the saint. Another important contribution of Sri Thyagaraja, hailed as one among the trinity of Carnatic music, lies in his improvisation, known as ‘Sanghithis’.

A devoted worshipper of Lord Ram and an inspired composer of Bhajan songs and classical music and spiritual philosopher, the saint is believed to be the incarnation of sage Valmiki.