The mayor of Nazareth said Saturday that Christmas celebrations would go ahead in Jesus’s hometown, days after announcing holiday festivities would be canceled in protest of the US recognition of Jerusalem as Israel’s capital.

“Reports that Christmas events were canceled this year are incorrect,” said Ali Salam, who is mayor of the town in northern Israel. “Just as every year, the city is decorated for the holiday and we are excited to receive the tens of thousands of visitors who will arrive, and to give them a festive and special experience.”

Salam, who is Muslim, said people of all faiths were welcome to visit the city.

“[I] invite all the residents of the State of Israel — the Jews, Muslims and Christians — to come to the city of Nazareth and take part in the Christmas celebrations,” said Salam. “Nazareth is the city of peace and brotherhood between religions and nations, and there is nothing like the spirit of the holiday and the shared experience to prove it.” 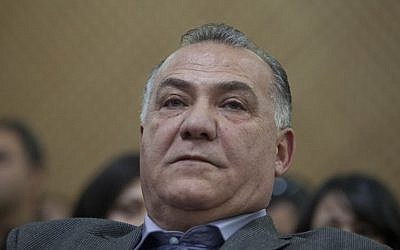 Salam’s statement came as the start of the Christmas festivities was set to begin in Nazareth later Saturday with the lighting of the tree.

It marked a reversal from Thursday’s announcement by Nazareth’s city council that Salam had ordered the axing of all planned artistic events, including a festival and large Christmas market.

“Our identity and faith aren’t up for debate,” Salam had said Thursday. “The decision [by Donald Trump on December 6 to recognize Jerusalem as the capital of Israel] has taken away the joy of the holiday, and we will thus cancel the festivities this year.”

Nazareth is one of the holiest cities in Christendom because it was there that the angel Gabriel is believed by Christians to have told the Virgin Mary she would conceive and bear Jesus.

According to the New Testament, Jesus also grew up in the town.

The annual celebrations are a major tourist draw and source of income for the city, which is inhabited primarily by Arab citizens of Israel, two-thirds of whom are Muslim and the remaining third Christian. 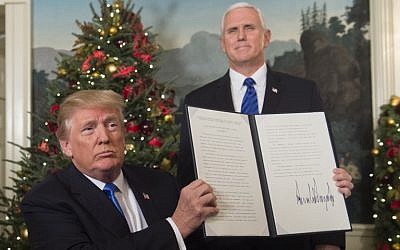 US President Donald Trump holds up a signed memorandum recognizing Jerusalem as Israel’s capital, as US Vice President looks on, at the White House, on December 6, 2017. (AFP Photo/Saul Loeb)

In an address last Wednesday from the White House, Trump defied worldwide warnings and insisted that, after repeated failures to achieve peace, a new approach was long overdue.

He described his decision to recognize Jerusalem as the seat of Israel’s government as merely based on reality.

The move was hailed by Prime Minister Benjamin Netanyahu and by leaders across much of the Israeli political spectrum, and condemned by the vast majority of the international community. Trump stressed that he was not specifying the boundaries of Israeli sovereignty in the city, and called for no change in the status quo at the city’s holy sites.

Sue Surkes contributed to this report.