The Sa Huynh Culture Museum in Hoi An displays artifacts of ancient Sa Huynh civilization which flourished 2,000 years ago and founded the Hoi An trading port to trade with merchants from Southeast Asia, South India, and China. 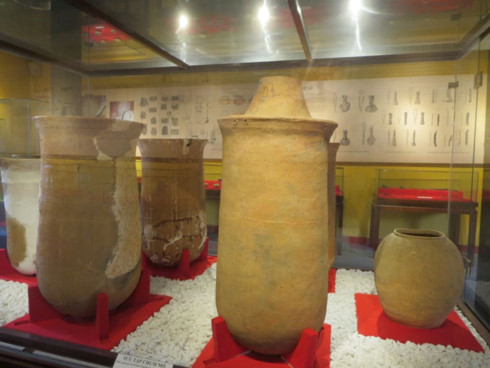 Bui Huu Tien, Deputy Director of the Museum of Anthropology of Hanoi has been at the Sa Huynh Culture Museum for several months to help his colleagues restore artifacts found in earth tombs of the ancient people of Hoi An.

Tien said, "The collection of Sa Huynh artifacts is unique. The museum features ancient funerary jars and presents the material and spiritual life of people thousands of years ago. It helps visitors better understand the Sa Huynh civilization.”

Doctor Tien and Tran Cong Trung, a member of the Center for Hoi An Heritage Culture Preservation are restoring an ancient bowl, one of 946 objects in the museum which reveal the life of the people of the Sa Huynh civilization.

Trung said, "The museum was created in 1995 following excavations of archaeological and sites in Hoi An. All the objects on display are original artifacts."

Trung noted that the exhibited objects reflect the life of the Vietnamese people from 1000 BC to the 2nd century, who were the first to settle in the central region.

He added, "The museum has a collection of funerary jars of various shapes and offerings found at burial sites. We also have iron tools not from the region of Hoi An but from the region of Oc Eo in the south and Dong Son in the north. These objects testify to a flourishing trade between Sa Huynh, and North and South Vietnam. A third collection is dedicated to jewelry, mostly stone earrings. "

The museum has more than 200 funerary jars, and ceramic and bronze objects, many of which remain intact. Descriptions are given of each item on display. Some objects are engraved with religious symbols, plants, and animals.

The museum provides detailed archeological explanations with documents and photos that show their exact locations underground. The museum also displays documents on funeral customs, concepts of life and death, aesthetic perceptions, and ancient Hoi An trading.

The museum is open from 7 am to 9 pm every day, except the 10th day of the month when it is closed for maintenance.