As well as attending the premiere, the royals visited the set of The Last Jedi during production.

And movie heroine Rey, played by Daisy Ridley, was tasked with showing the Force fans around. “I mean I’m not great at small talk,” she quips.

“So it was a bit awkward at the beginning.”

“But the thing that is wonderful is, we are just on the poster, but there are thousands of people who work far longer and harder than we have on it. 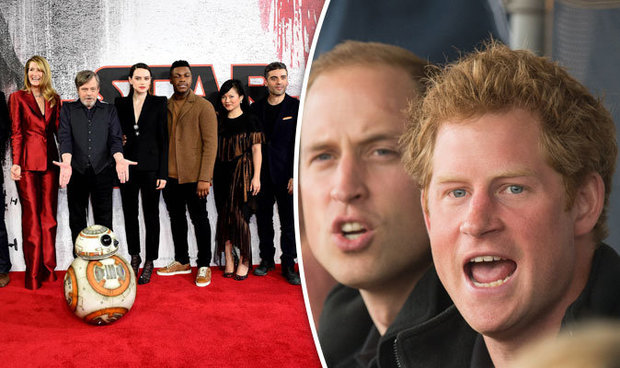 ROYAL HEIR FORCE: The royals visited the set of The Last Jedi during production

“It was a bit awkward at the beginning”

“So to take the princes around the creature workshop, the prop space, wardrobe and people who aren’t usually recognised, that felt pretty cool for me.”

For Mark Hamill (also known as Luke Skywalker) meeting William and Harry was an opportunity to settle an old score.

The Jedi veteran explains: “Something had been bothering me since (1983’s) Return Of The Jedi. When they told us that Carrie and I are brother and sister I said, ‘Wait a minute if Luke is Princess Leia’s brother doesn’t that make me royalty?’ Carrie went, ‘No!’ Unfortunately, it was a split decision because William said, ‘Yes’, but Harry said, ‘I need more information’.”

William and Harry are rumoured to play stormtroopers in The Last Jedi but director Rian Johnson is keeping schtum. 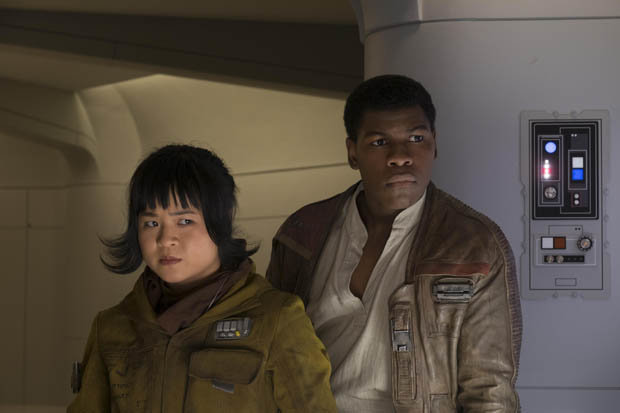 “I can neither confirm nor deny,” he says.

The Last Jedi has enjoyed rave reviews and certainly goes to parts of a galaxy far, far away we haven’t seen before.

“From the very start there was nothing imposed on this movie from anyone,” says Johnson, who also directed.

It’s so good that even Star Wars creator George Lucas, who sold the franchise to Disney, has given it a big thumbs-up.

“He was very gracious,” says Johnson.

The first ever Star Wars movie was released in 1977, DailyStar looks back on the cast members and where they are now. 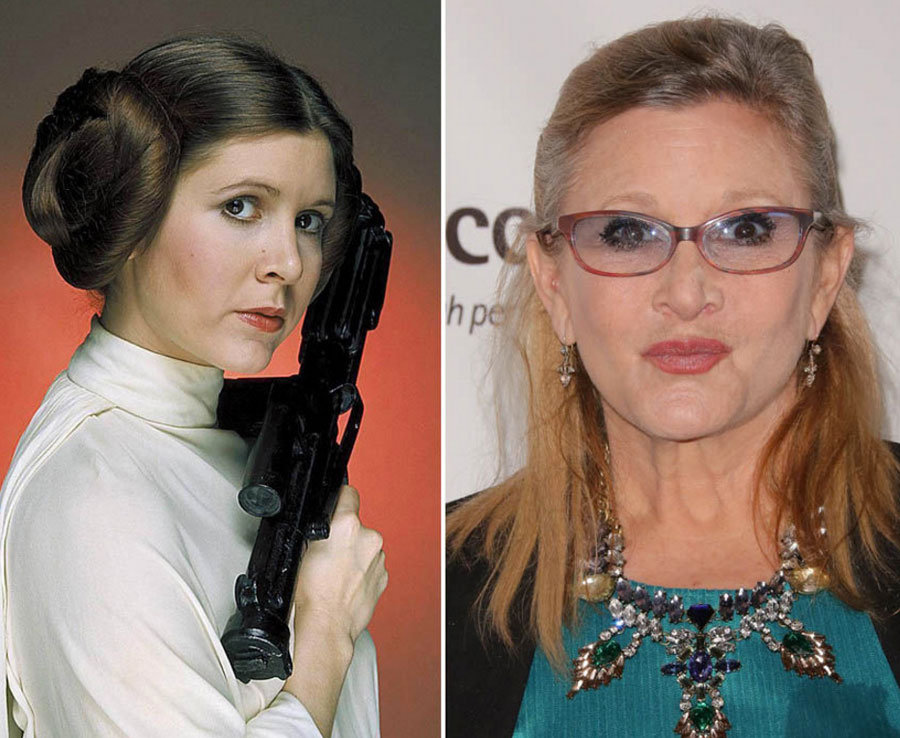 Getty Images Carrie Fisher played one of her biggest roles as Princess Leia in Star Wars. She filmed scenes for the latest Star Wars Episode VIII due out in 2017 before her tragic death on 27th December 2016

“I grew up not just loving Star Wars, I went to the same film school because I read a book about George Lucas and it said that he went there. So to have chat with him and have him be so kind felt pretty good.”

“It’s a dysfunctional family,” he says reflecting on the Skywalker saga.

“I felt a strong sense of nostalgia, I used to be the orphan discovering hidden powers, now it’s Daisy.

“So I had to fight the irrational urges of a bunch of strangers rummaging through my toy box playing with my toys. But now I’m at this age I’m happy for the kids to do the heavy lifting.” 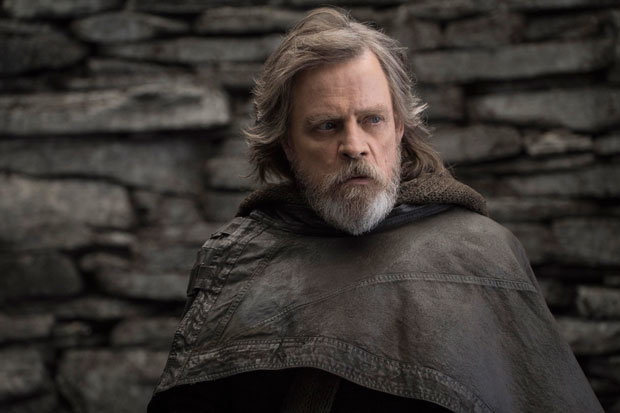 He’s excited to become a Christmas toy again, too.

“I do it for the sheer joy of being a Pez dispenser. I don’t care about the money.”

Luke gets more screen time than he did in The Force Awakens. So does Andy Serkis, who plays bad guy Supreme Leader Snoke.

“The thing about Snoke is there’s this public hologram appearance he does to scare people,” says Serkis. 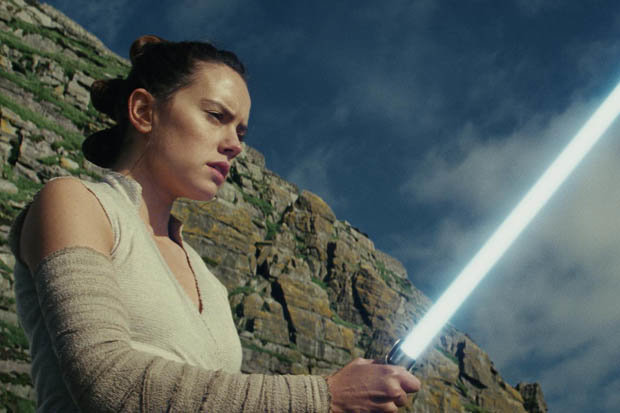 “But then there’s the wizard behind the curtains, like in the Wizard Of Oz. There’s this quite frail and fearful character because there’s a feminine energy that he knows is coming to take him down.” One of Snoke’s henchmen, General Hux, has the thankless task of leading The Force Order.

“He is like a kicked dog,” says actor Domhnall Gleeson.

“But a dog who gets kicked over and over again eventually bites back."

If the bad guys get worse, then the good guys get stronger. John Boyega had to learn to fight Captain Phasma, played by Game Of Thrones star Gwendoline Christie.

He recalls: “She has a strong reach, one must dodge and pirouette around her at all times.” 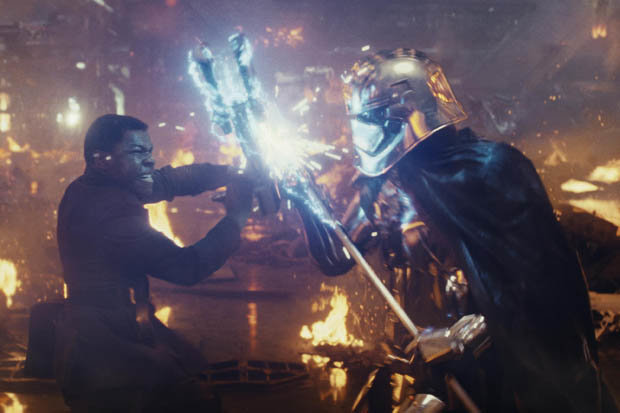 Christie jokes: “There was a moment of connection between us.”

The Last Jedi is tinged with sadness as it’s the last time we will see Carrie Fisher, who died shortly after completing the movie.

Gleason says: “For people who knew Carrie, she will live forever anyway. Now we get to see her as Leia in this fi lm for the last time I guess and she’s really brilliant in it.

“I love that Rian wrote Carrie a beautiful fim.”

● The Last Jedi is on at cinemas across the UK now.