New Ukrainian President Volodymyr Zelenskiy took his oath of office and delivered an inaugural speech in which he announced the dissolution of parliament in Kiev. Anadolu Agency/Getty Images hide caption

Ukraine now has a new president, as Volodymyr Zelenskiy was sworn into office on Monday — and the famous comedian immediately said one of his first actions will be to dissolve parliament. Fulfilling a campaign promise, Zelenskiy announced a snap election to choose new lawmakers.

“Government is not the solution to our problem; government is the problem,” Zelenskiy said in his inauguration speech, quoting Ronald Reagan — another actor-turned-president — from his 1981 inaugural address.

As Zelenskiy dismissed the Supreme Rada, he said new national elections will be held in two months — and that politicians should use that time to prove their worth. He called on legislators to adopt anti-corruption laws, including measures that would strip legislators of their immunity from prosecution and increase transparency.

“Glory to Ukraine!” Zelenskiy, 41, said after announcing he will dismiss parliament’s current body.

While Zelenskiy quickly got to work, lawmakers were also busy, arranging new coalitions in a bid to block his move under parliamentary rules, according to the Kyiv Post newspaper. For the dissolution to become official, the president must first consult with lawmakers and issue a decree, according to the UNIAN news agency.

Despite those complications, a battle with opposition lawmakers could be the easiest item on the new president’s to-do list. In addition to fighting corruption, Zelenskiy has pledged to end the bloody conflict in eastern Ukraine and broker the return of prisoners of war — without ceding any territory to Russian-backed separatists. On Monday, he also said Ukrainians are burdened by a lackluster economy, citing tariffs and low salaries.

Zelenskiy defeated incumbent Petro Poroshenko in a landslide 73% victory last month. It was a stunning result for the political novice, whose previous experience in government is almost entirely fictional: On Ukrainian TV, Zelenskiy is famous for playing a high school history teacher who is elected as Ukraine’s president after a video of him ranting against the status quo goes viral.

In his inauguration address, Zelenskiy urged ministers and government officials to resign if they aren’t willing to work for change. And he urged Cabinet leaders and others not to put his portrait on their office walls.

“I really do not want my pictures in your offices, for the President is not an icon, an idol or a portrait,” he said. “Hang your kids’ photos instead, and look at them each time you are making a decision.” 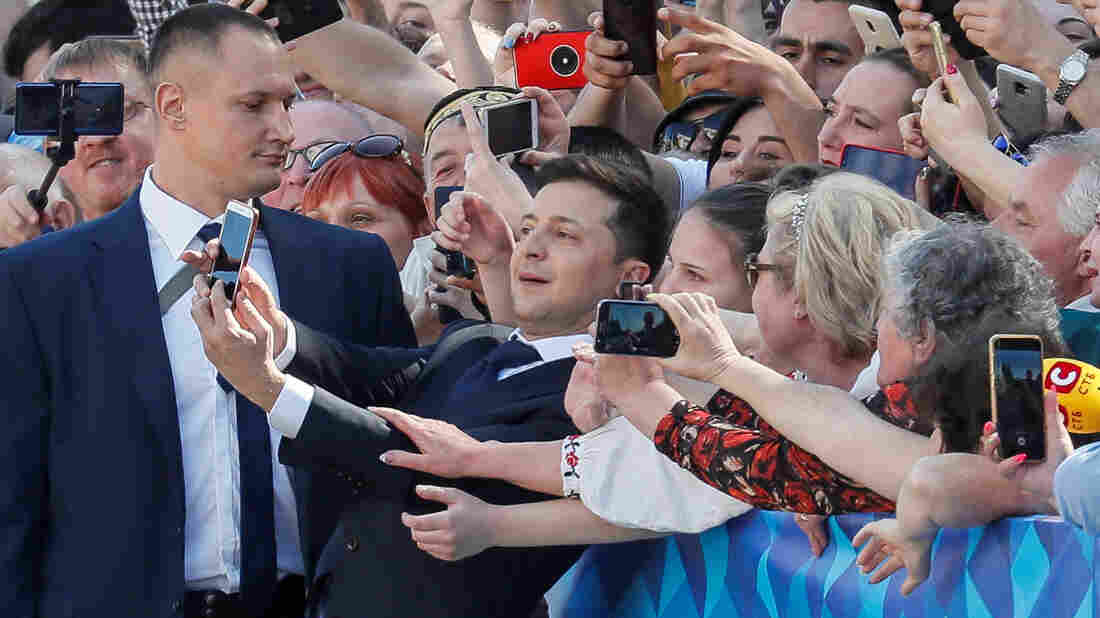 Ukraine’s new president, Volodymyr Zelenskiy, paused on the way to his inauguration to take a selfie with supporters in Kiev. Gleb Garanich/Reuters hide caption

Zelenskiy arrived at his inauguration Monday after walking through Kiev’s Mariinsky Park, where cheering supporters thronged barricades marking his path to the parliament building. Walking with a camera crew and a small security detail, he leaned over the railing at one point to take a selfie with a young fan, using the crowd as a backdrop.

By shutting out travelers immunized with Sputnik V, the EU is...