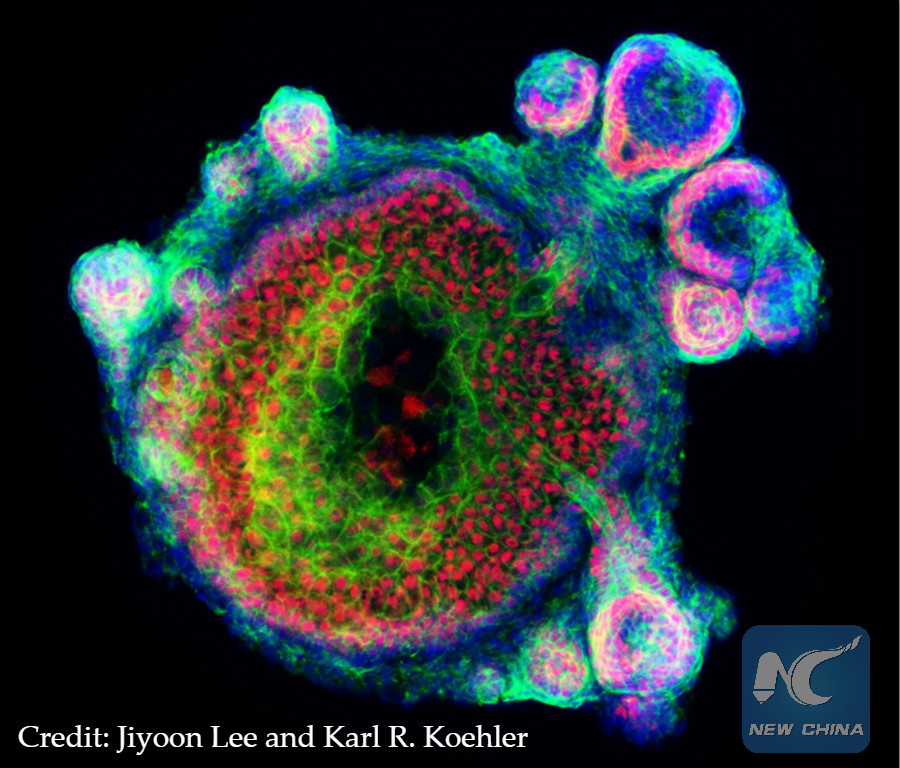 In this artwork, hair follicles grow radially out of spherical skin organoids, which contain concentric epidermal and dermal layers (central structure). Skin organoids self-assemble and spontaneously generate many of the progenitor cells observed during normal development, including cells expressing the protein GATA3 in the hair follicles and epidermis (red). (Credit: Jiyoon Lee and Karl R. Koehler)

WASHINGTON, Jan. 2 (Xinhua) — American scientists have cultured the skin tissue with hairs in a laboratory, using stem cells from mice.

The study, published on Tuesday in Cell Reports, said it lent a clue to the better understanding of hair growth and a new possibility for drug testing.

The study showed that a single skin organoid unit developed in culture can give rise to both the upper and lower layers of skin, and the two layers grew together to allow hair follicles from which the hairs grew to form as they would in a mouse's body.

Karl Koehler, author of the paper and a researcher at the Indiana University School of Medicine, described the tissue like "a little ball of pocket lint that floats around in the culture medium."

"The skin develops as a spherical cyst, and then the hair follicles grow outward in all directions, like dandelion seeds," Koehler said.

Researchers said that the skin grew a variety of hair follicle types similar to those present naturally on the coat of a mouse. It consisted of three or four different types of dermal cells and four types of epidermal cells, making a diverse combination that more closely mimics mouse skin than previously developed skin tissues.

They learnt that the epidermis grew to take the rounded shape of a cyst, then the dermal cells wrapped themselves around these cysts. But when this process was disrupted, hair follicles never appeared.

"It's very important that the cells develop together at an early stage to properly form skin and hair follicles," Koehler said.

None of the previously cultured skin tissues were capable of hair growth.

The rounded shape of the tissue, however, prevented the hairs from shedding and regenerating as the hair follicles grew into the dermal cysts.

Koehler's team believed, once the hair follicles found a way to complete their natural cycle in the culture medium, the organoids were looking to offer more possibilities for medicine and be used as a blueprint to generate human skin organoids.

"It could be potentially a superior model for testing drugs, or looking at things like the development of skin cancers," Koehler said.